Ukrainian IT Sector in Wartime: How It Is Coping And Helping Hasten Victory | ITExpert

Ukrainian IT Sector in Wartime: How It Is Coping And Helping Hasten Victory

ITExpert team 25.07.2022
Main Blog HR
Ukrainian IT Sector in Wartime: How It Is Coping And Helping Hasten Victory
Blog 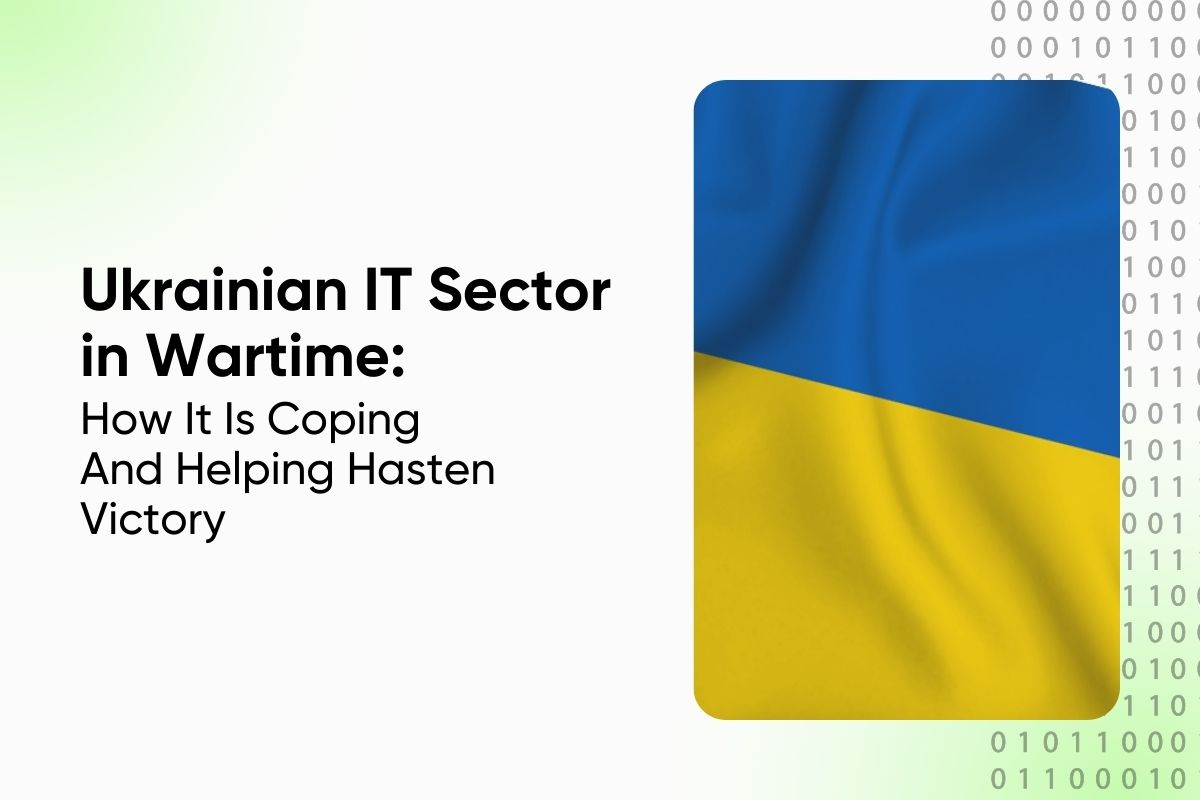 Ukraine has been at war with russia from the moment of Crimea’s peninsular annexation in 2014. For eight years, the military actions never stopped in Donetsk and Lugansk, Ukraine’s eastern regions. Despite this, the Ukrainian tech sector grew by 36%, from $5 billion to $6.8 billion in exports in 2021. Moreover, the number of IT specialists increased from 244.000 to 285.000.

Ukrainians work for international corporations and develop their successful digital projects. Just unlock your phone and look through the apps:

We are daily users of software created by Ukrainian developers.

On February 24, war came into our lives. russia attacked Ukraine. Is it possible to be prepared for this? No, it’s impossible for a person or a business. Let’s get through statistics on how the IT industry is adapting to the war and forecasts for the upcoming months.

How the IT Industry Reacted to the Full-Scale War

Despite the war, the IT industry suffered relatively small losses among all other sectors of the economy. Moreover, despite the 40% decline in the economy, the IT sector continues to fill the budget with currency. Only 5–10% of clients aren’t ready to continue working with Ukrainian businesses due to significant risks (potential mobilization, death of employees, etc.). These are isolated cases, the majority of clients remain in Ukraine.

Ukraine’s IT industry is staying open for business. Software developers work from bomb shelters and safer regions, in a determined effort to continue supporting clients, the national economy, and the war effort.

When the US government revealed the russian plans to invade Ukraine in February 2022, about 92% of IT companies with offices in Ukraine created a plan for the employees’ relocation. They immediately moved their specialists to the Eastern European countries or the Ukrainian western regions. When the full-scale invasion started on 24 February, those companies organized the evacuation of all their employees from central and eastern regions of the country.

For example, a software development outsourcing company called N-iX evacuated 600 of its employees, most of them were in Kyiv. According to the company’s chief strategy officer, Nazariy Zhovtanetskyy, a week after N-iX resumed delivery, they were back to 85% capacity, and at 95% for the past three weeks.

According to the study, during the full-scale war, the IT industry:

IT specialists also make donations and help (independently or as part of companies) to purchase military equipment. 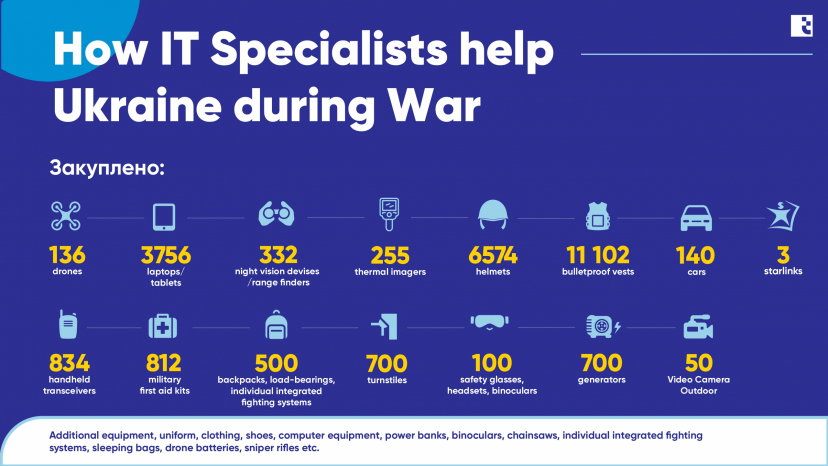 How Ukrainian and Foreign IT Companies Support Their Employees

Ukraine has been a popular destination for hiring IT specialists or outsourcing software development because there is good senior engineering talent to hire. Moreover, unlike most of Europe, the notice periods in the country are short, and specialists’ rates are more affordable than in Western Europe, as well as in the US, Canada, and Australia. Check out more info about the benefits of working with Ukrainian developers and their rates in the blog post.

Heads of IT companies actively help teams with relocation, as well as adaptation to new conditions, including in the following ways:

For example, Sigma Software helped 1.140 employees and their families move during the first couple of weeks of the war. A software development company MEV with a business unit in the US and development in Ukraine also ensured the evacuation of employees who were worried about themselves or their families. 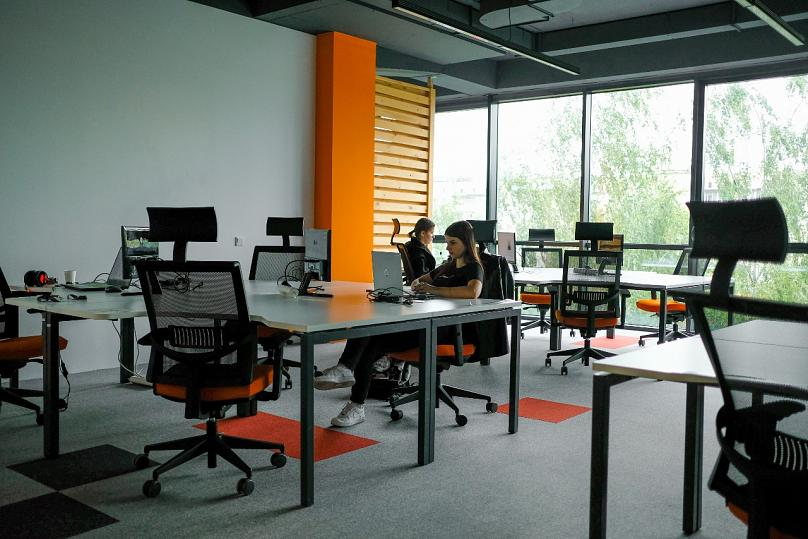 The companies also created emergency communication channels that employees could use for urgent communication, understanding how to prepare for force majeure, find an apartment abroad, etc. When the war happened, companies began to share proven news resources, as well as organizations for donations to the Armed Forces of Ukraine and civilians affected by the russian invasion.

Several international IT companies even launched crowdfunding funds. For example, the Managing Director & Founder of the software development company MEV with a business unit in the USA and a development center in Lviv and Cherkasy initiated such a fund’s launching. All funds go directly to support people affected by war as well as those who are protecting Ukraine from invasion. MEV’s specialists provide supplies, military equipment, food, and other items.

The biggest international tech companies and start-ups also implemented their sanctions against russia and belarus within a few days of the invasion:

You may be interested: a team of Ukrainians from the venture capital and media community has launched a website that collects data on global IT companies that condemned the invasion, as well as those who supported it or did not express their position. The list is constantly updated. A separate column in it is for companies that speak out like “war is bad”, “we all should live in peace”, and “Russia and Ukraine should not fight”, but don’t specify which side they are on in this war or don’t call a spade a spade. 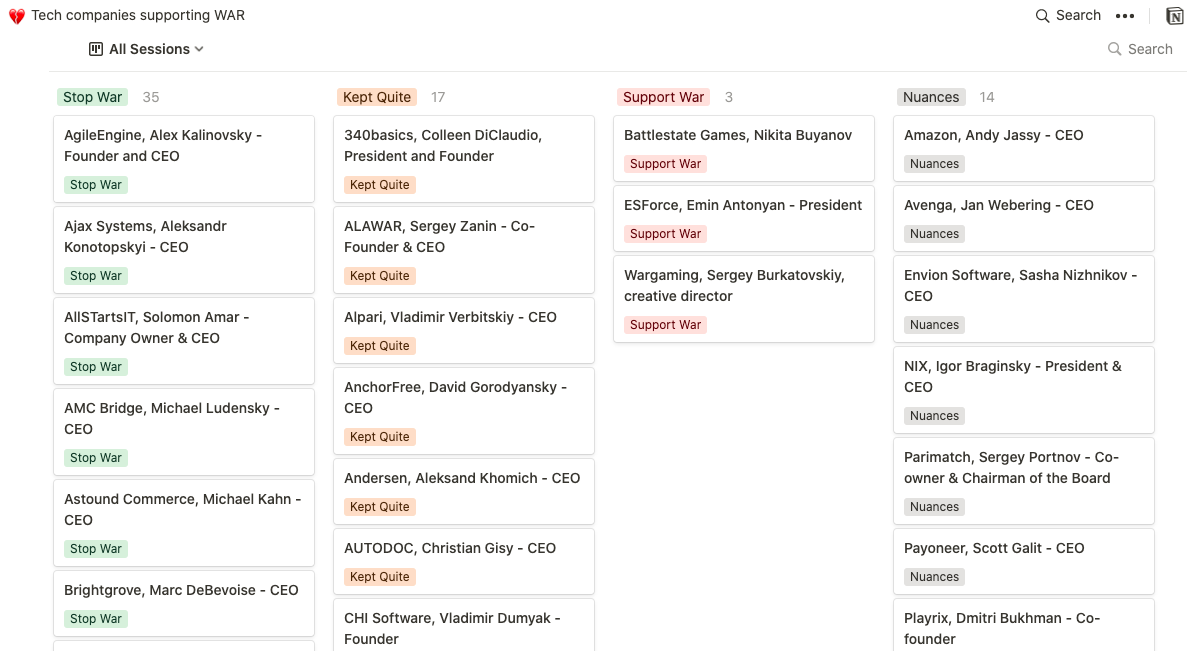 The main criteria for selecting companies for the website are their connection with Ukraine: Ukrainian roots of management, entering the rank of top 100 Forbes Ukraine, IT companies in Ukraine ranking on the AIN.UA, DOU, Vector articles, list of unicorns with Ukrainian origin

According to an anonymous job search for developers Djinni, the top offers in March fall to about $8000–8500 per month against $10.000 and more in January or early February. Average salaries remain almost the same.

Shortly, the range of salaries in the Ukrainian IT industry will decrease, because the supply will exceed the demand, according to independent IT consultants. Many specialists have lost their jobs and intend to return to them as soon as possible, without prioritizing the most favorable conditions.

We at ITExpert conducted an internal survey and found out that 9% of specialists in the industry have reduced their salary expectations by more than 20%, and 6% of IT specialists — by 10–20%. People have become more accommodating about salaries as many companies temporarily freeze salary reviews until the country stabilizes — or stop hiring altogether in Ukraine.

At the same time, about 15% of the industry’s representatives are ready to work for a 20% higher salary than before the war, and 16% of IT specialists ask for a salary of 10–20% higher. The possible reasons are related to the difficulty of finding a new job or changing the old one during the war. There may also be the reasons: a general increase in prices in the country, a relocation abroad, etc. Expectations regarding the salary of 53% of respondents in IT companies have not changed. 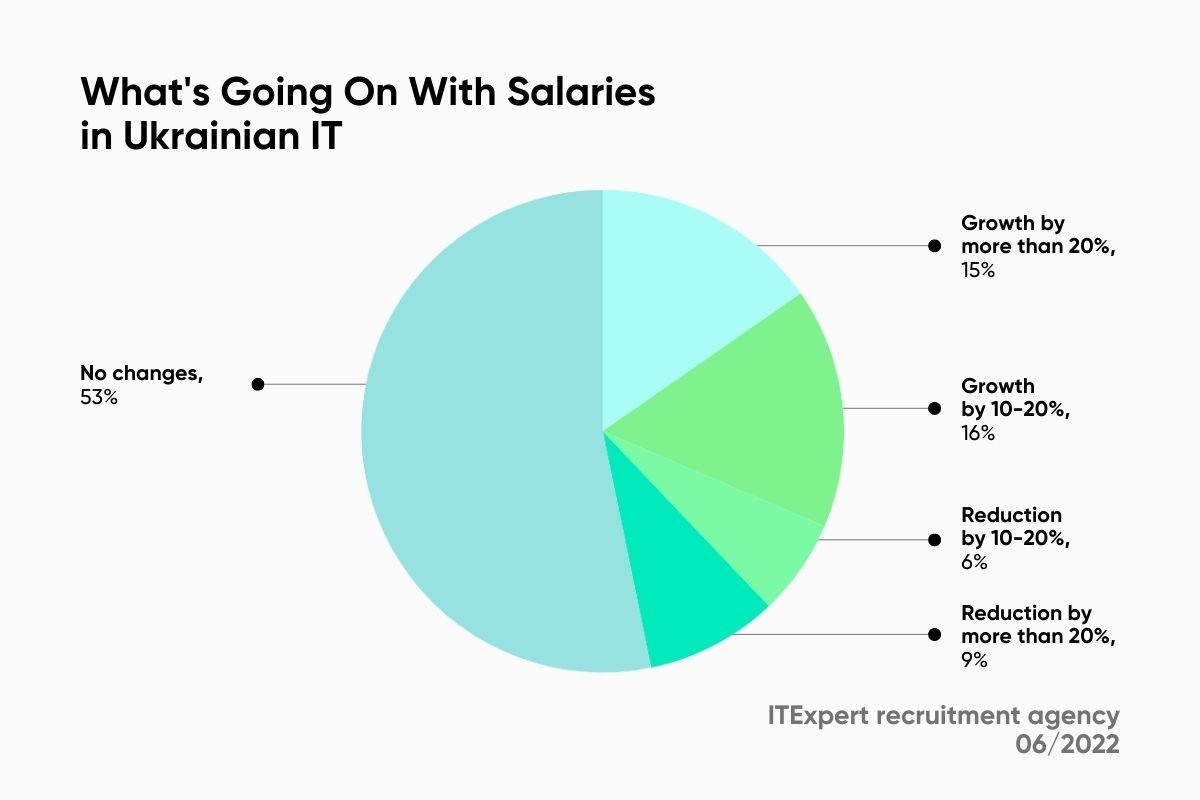 International trade sanctions against the putin regime have also meant that many western companies have canceled their contracts with russian developers. Why should you hire Ukrainian IT specialists instead? Yes, it’s riskier than before the full-scale invasion. However, most developers work in safe regions now and have a stable Internet connection. Moreover, large companies have already bought Starlink.

Doubt whether to hire Ukrainian specialists to the team? Check out our new blog post that breaks things down!

“The IT sector in Ukraine is growing by 20–25% annually and will continue to grow after the war. Ukraine is one of the largest sources of IT talent in Europe. We have more than 200 thousand specialists, in Romania — no more than 120 thousand, in the Czech Republic — up to 100 thousand. At the same time, it’s quite easy to start working with Ukrainian developers — this can be done through b2b contracts, without registering an additional legal entity in Ukraine.

It should also be taken into account that the market for IT outsourcing in russia and belarus is being destroyed. No one is ready to spoil the reputation by working with these countries, so clients are refocusing on other markets in Eastern Europe.

By hiring Ukrainian specialists in such a difficult time, IT employers can earn high loyalty among candidates and teams, and scale quickly in the future.” Stas Shihov, CEO and founder of IT recruitment agency ITExpert

Stas has been working for more than six years in this field, helping clients to find the right people, choosing recruitment solutions, and advising on current salary rates, employment conditions, and positions in IT.

IT is Ukraine’s fastest-growing industry. When the war is over, it’ll be the driver of our economy once again. Ready to hire a software specialist for a FinTech, IoT, Blockchain, Healthcare, eCommerce (and not only) product? Looking for a CIO, CTO, or Delivery Manager?

Let us help you find the best candidates for you on time! Drop us a line, and start forming a team with skills perfectly suited to make up for any gaps in your development process that will reach your software development goals.

14.06.2022
How to Attract First-Rate Candidates — Must-Haves for Companies 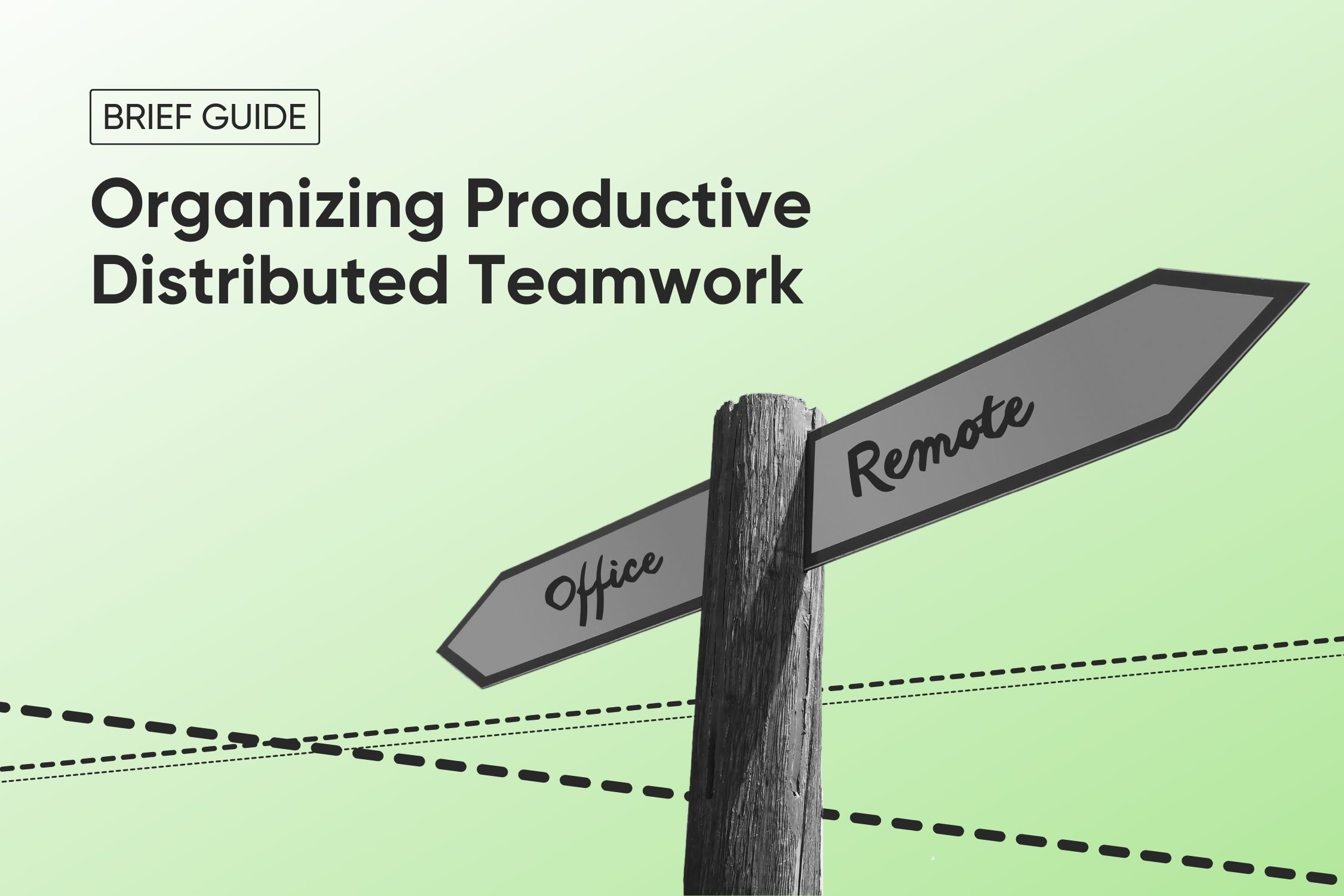 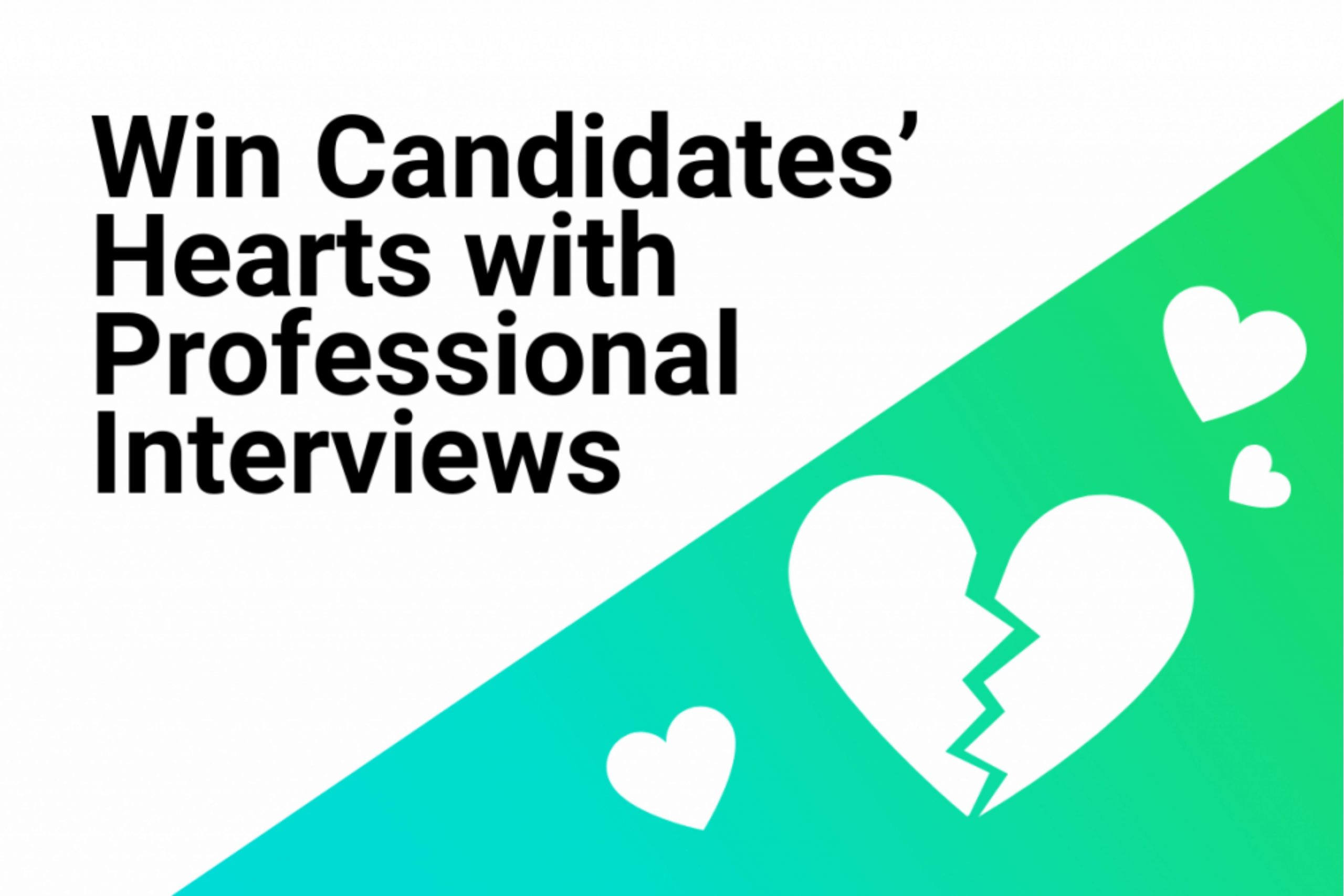 14.06.2022
How to Attract First-Rate Candidates — Must-Haves for Companies 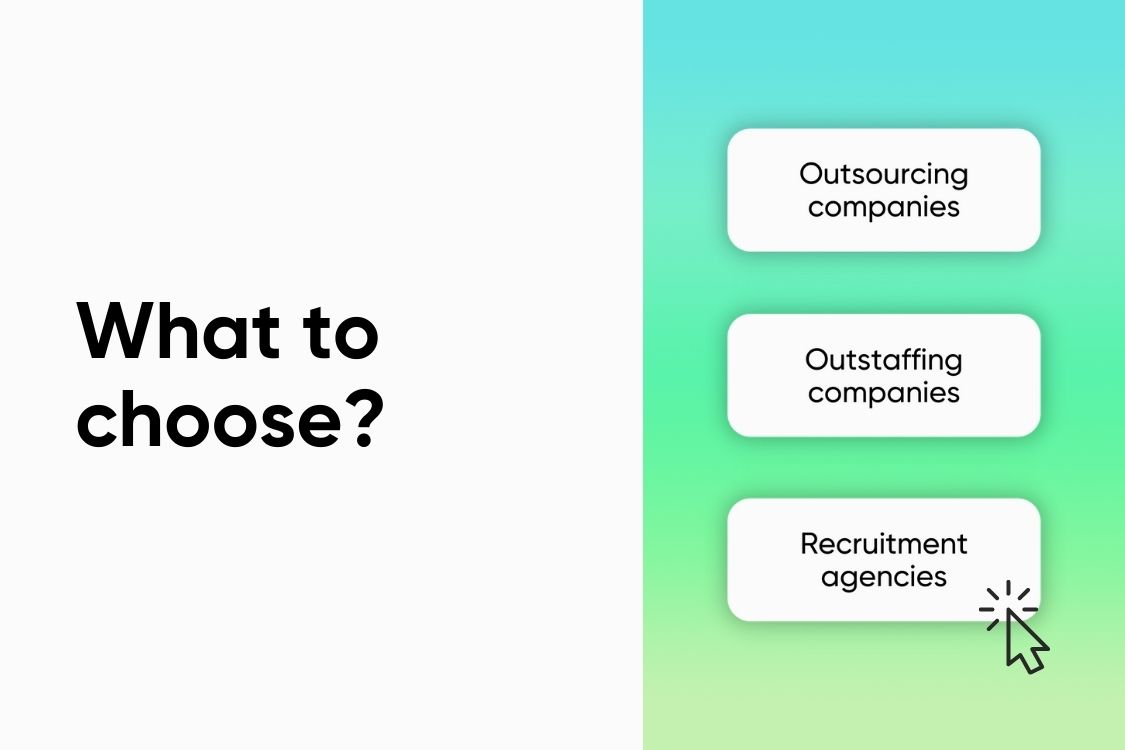 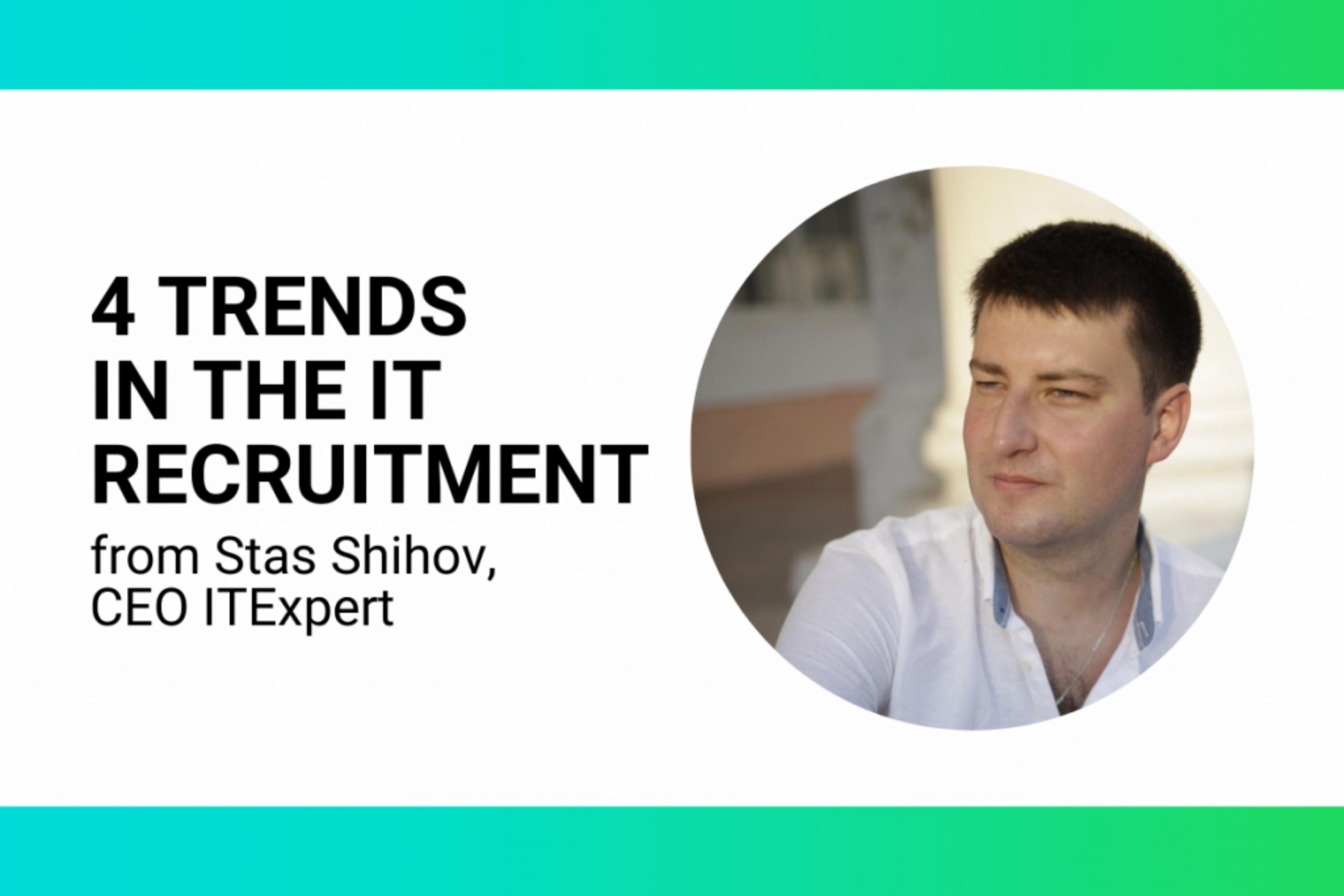